Again, I have managed to introduce a couple of new things and try some new looks out using my stash. A Brilliant Brunette inspired me to do an orange and cranberry eye which was gorgeous and a lot of fun. I took some of my unloved pieces with me in vacation with the idea that I would be forced into using them and discovering new favorite this way. One of them was the NYX Jumbo Eye Pencil in Milk which great white base to make colors pop even more, so it’s a great one to use when you are doing a colorful eye. Another winner from this trick was the MAC Holiday 09 Palette in Mystic Cool, which I used for a look here and here. I just cannot make up my mind whether I want to depot these palettes or not. They are so pretty, but I just know that if I depotted them I would use them more. Then again, by not, they become very good for travel, Six to one, half a dozen to the other… 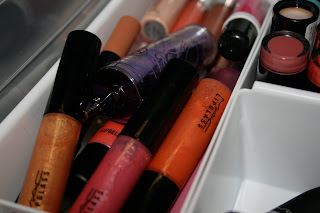 This is one of my favorite Temptalia looks, and I used Freshwater and my UD 24/7 liner in Binge for it when going for date with my man the other night. He is a sucker for that black cat’s eye liner. Samoa has not been used, but I did post about my love for all things peach or melon toned here. It has some serious competition from Benefit’s Nice Melons and Elf’s Mineral Shadow in Natural, but I do feel confident that they can all get along. Stila’s Kitten is one shadow in this school that did get a reasonable amount of face time this month – I’ve used it on a couple of lazy morning single shadow looks. I do find that it has a tendency to sneak all over my face though! I was wondering if I could mix it with my MAC Gloss to make a lip gloss though?
Anyone following my twitter feed would know that I’ve recently rediscovered MAC Dazzleglass Crème in Perfectly Unordinary as gorgeous over Covergirl lipstain Everbloom Kiss. It’s pretty, girl, and spring like. It was worn on the date with my lovely husband. 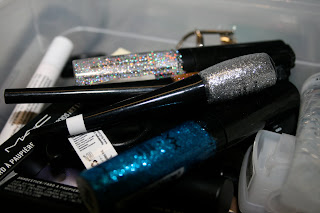 Jolie Laide. Pretty Ugly. Either a woman who is unconventionally pretty, or a woman who is not pretty but makes the most of herself through her style and beauty. I'd like to think I am a mixture of both. Or at least, trying to get there.

Any questions or feedback, please email me at jolielaidegirl [at] gmail.com