When I first reviewed Clinique City Sun Block, I had been using it on a daily basis for a couple of weeks. At the time, I felt that it was a good product, but not amazing. Today’s post is about how a product can move from pretty good to must have simply by doing their job really, really well. 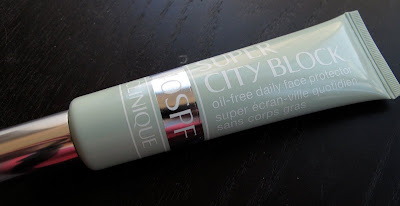 As a city girl, giving Clinique City Sun block a test ride on the streets of Manhattan seemed like a fair trial, and it lived up to its promise. It felt light, I didn’t burn, and my skin didn’t feel too clogged. Two months later, and I’m still using it every single day. My skin has not felt clogged or dirty even though there’s an extra step in my routine, and I’ve had limited extra shine. I’ve not had any burn, or really, any tan, since I started using it. What makes this product go above and beyond for me is its versatility. I’ve worn it running, on boat trips, while biking around Cape Cod, while wandering around the city – basically everywhere for the last couple of months, and never had a single problem with it. It has literally gone everywhere I’ve gone this summer, and my skin looks fine, or even good. In previous summers I’ve had problems with feeling greasy or dirty, with build-up and general not in tip-top condition. Not this year, and I really do think that a big part of that is the hard-working, but lightness of Clinque City Sun Block. It’s a simple product that works well, doing exactly what it says it will. And in the beauty blogging world, that is actually saying a lot.
Posted by Fiona M at 09:27

My mom uses this and really like it too!

This sounds like such a wonderful product. I've never really found a sunscreen for the face I've liked - maybe I should give this one a go :)

Jolie Laide. Pretty Ugly. Either a woman who is unconventionally pretty, or a woman who is not pretty but makes the most of herself through her style and beauty. I'd like to think I am a mixture of both. Or at least, trying to get there.

Any questions or feedback, please email me at jolielaidegirl [at] gmail.com